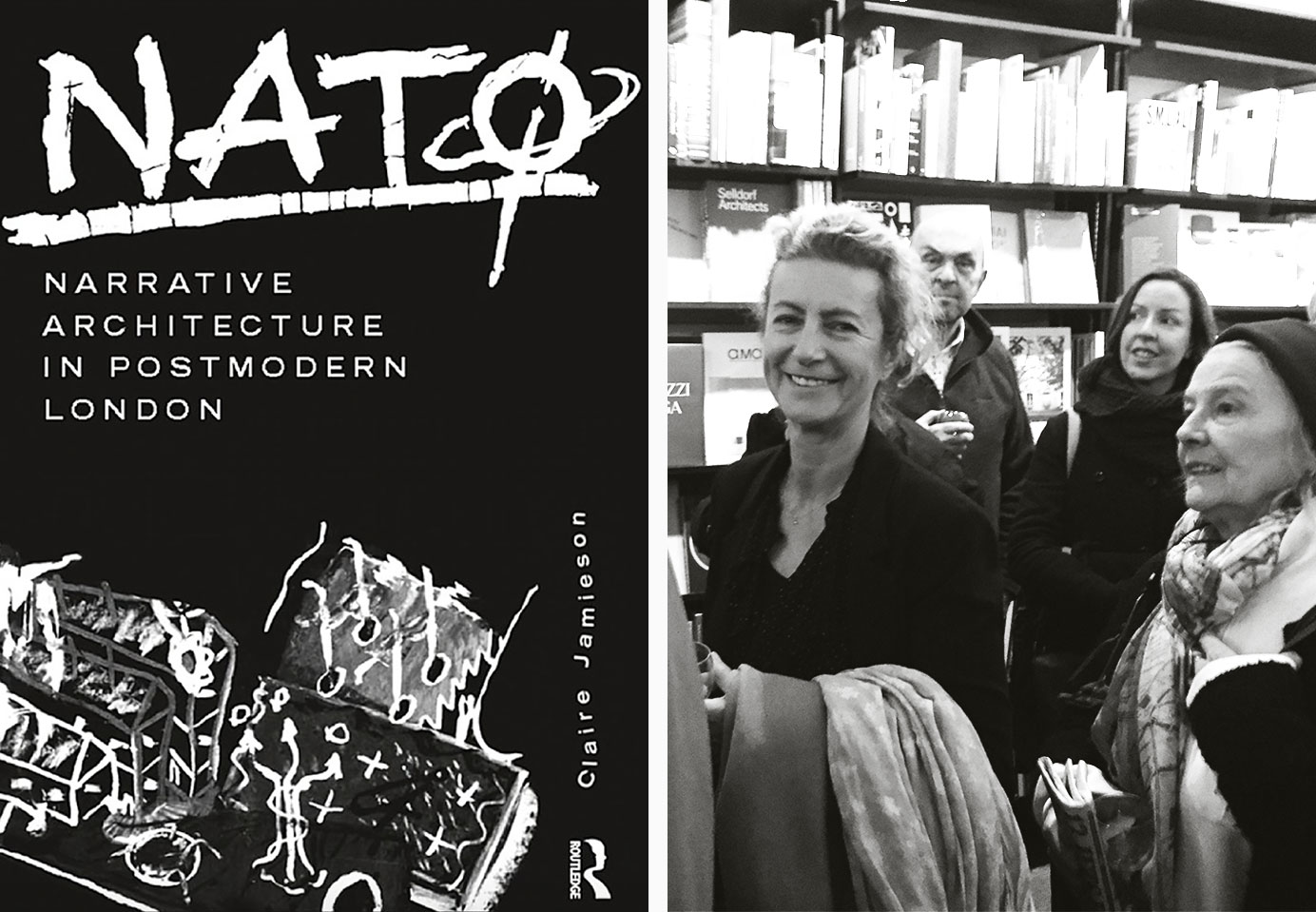 NATØ in the news again

On 25th January Christina was invited to the launch of Claire Jamieson’s new book on NATØ, the radical architectural group that Christina was a founder member of back in the late 80’s. I went with her to see the launch. It was held in the AA bookshop which was packed to the hilt with academics, old friends, fellow travellers, teaching acquaintances from the AA and, of-course, other founder members: Nigel Coates, Robert Mull, Mark Prizeman, Catrina Beevor, Carlos Villanueva, Martin Benson and the reclusive Peter Fleissig. The only member who could not be present was Melanie Sainsbury, who now lives in France.

The book gives a detailed account of the activities of this group and describes the emerging context of post modernist theory (literary led rather than architectural) which gives insights into the actions of the group, and their healthy disdain for authority, professional institutes and orthodoxies of all kinds. The book has brought together a wealth of material that had resided in Mark Prizeman’s attic for the past thirty years, during which time it has transformed, as the book well recommends, from refuse into valuable material; now collated through Mark’s curatorial impulses and analysed and rendered clear through Claire’s focused academic research.

It is an enjoyable and well considered book and it communicates the energy and well directed anger in a way that recalls some tracts of the Situationist International. The book and the group as a whole spoke out for another future for architecture that would elude servitude as a CAD lackey, a technician or an illustrator of probabilities generated by others; it sought out fresh pastures for inspirations and offered new ways of experiencing constructed situations and places assembled less as a solution and more, as a provocation.

The book is a triumph, though, as noted by friend and co-founder Robert Mull… “Its difficult doing history, its difficult capturing history and its difficult being history”. To paraphrase Mark Twain, the latter part of this statement may be “greatly exaggerated”. Lets hope so for the sake of the architectural profession, which needs all the intellectual support and unfettered creativity it can get.

One huge question forms itself in the mind – if this was the last radical architectural movement of the millennium as Clair says, why is that? Where have our thinkers, tinkers and enfante terribles gone? What has become of architecture, or at least a strand of it as a master of its own destiny?

Speaking of Christina’s work now, at Fluid, its clear that a number of fundamental approaches to design emanate from NATØ days – working with what you have got, celebrating a polyglot mix rather than a refined and distilled palette, crunching uses and types of space together, telling stories through buildings, connecting urban territories together in revealing ways and, above all, thinking the design exercise as leading to a shared set of experiences and to the shelter and support of all types of users and passers-by.

I look forward to seeing these approaches played out in two new City of London commissions Christina is currently leading in territories centred by the Barbican on the one hand, and the Gherkin on the other – both densely layered places historically, physically, culturally and socially that need unpicking, reconnecting and enjoying in full.

I look forward to that enjoyment.